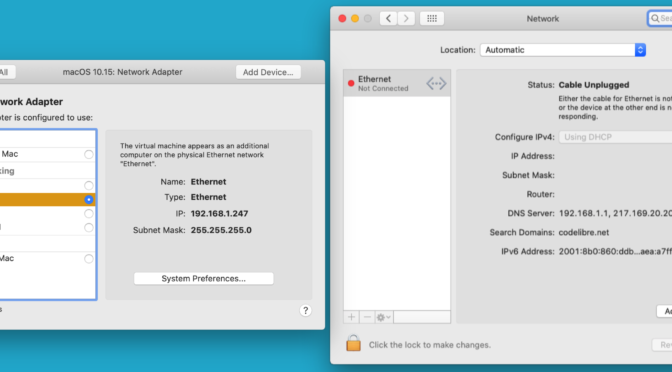 I haven’t touched any of the settings; this stopped working behind my back sometime in the last few days.  The system otherwise sits headless running VMs and nothing else.

I think I’ve likely been hit by the crash issue in the other thread, since I noticed the VMs stopped responding, and after I logged in with VNC it had rebooted itself.  While the VMs were running, none were accessible over the network, and looking more closely it looks like Bridged ethernet connections appear in the VMs as being “Not connected”:

The left is the configuration of one of the VMs (they are all the same–Bridged ethernet, so they all have global IPv6 addresses).  The right is the network configuration inside the VM.  Says “Not connected”.

I tried disconnecting and reconnecting the adapter using Fusion, but the guest didn’t notice any change, so I’m not sure where this “Not connected” state is coming from–the ethernet is physically connected on the host and working properly.  And it’s also “connected” within Fusion as far as I can see.

The networking is working fine on the host, and the guests were all running just fine up until a few days back.  I installed the latest VMware fusion updates, and also the latest macOS supplemental update, but it didn’t make any difference.

Has anyone else seen any similar issues with current macOS and current Fusion releases, or have any suggestions as to what might have gone wrong?