[Note: I discovered question is probably more appropriate to  Home > VMTN > VMware vCenter™ > Converter Standalone. forum, but unable to figure out to move it so created a duplicate post in that forum.]

I am a first time user. Please let me know if this would be better posted elsewhere. Thank you.

I attempted to install VMware vCenter Standalone Client ver. 6.2 on my Dell 8700 PC running Windows 8.1.  I selected to do a local install only. The install failed with an error something like “The service could not be started.”

It seemed to finish installing so I am able to start the application. But I get the following error message:

When I try to manually start it, I get the following error:

When I look at the dependencies, there are none:

When you fix an issue and think all is good with the world we get a new issue story of my life.

Anyway so we just updated App Volumes to 2.13.2.13 which was installed to fix an issue with the DB multiple same machine names etc.

So after the upgrade My team and I noticed that UEM started playing up.

We currently using UEM 9.3 and when we log into a Windows 10 1607 built it powers on does svservice (AppVolumes) and gets to “Please wait for the Vmware UEM Service”

And just hangs i can see App Volumes has attached App Stacks and can see the machine i am logging into but in VMware View Agent it says i have not logged in due to waiting on UEM Service.

Any one seen this issue. 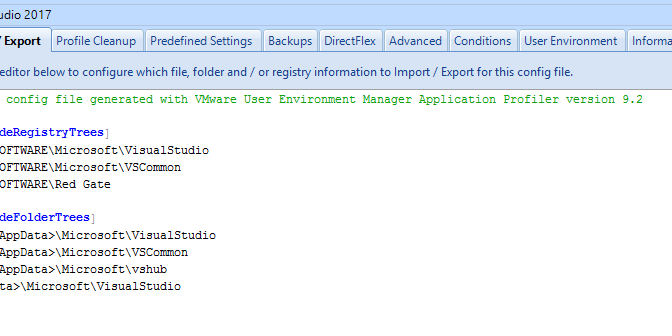 Here is our current configuration for it.

I generated the ini and such with the Profiler 9.2, but it wouldn’t capture anything. I found all these manually.

How I can delete the entry? Is it possible?

I attach an image with 2 vm, the one invalid and one valid:

i have 3D acceleration enabled but I can not disable under Solidworks options,  software OpenGL

on Parallels, there is a registry patch to fix, what should I try with Fusion?

How does the auto-suspend feature work in Workstation Pro 14?   As far as I can tell from the documentation, this feature only works for Shared and Remote vm’s. I have a few VM’s whose files are saved on different physical drives in the Windows host and if I’m not mistaken, Shared VM’s must be on the same physical drive. I prefer to have them on different physical drives for better performance. Is there a way to use auto-suspend for non-Shared VM’s?  I see a setting in the bundled Workstation Player that came with Workstation Pro, it says “When closing a virtual machine:” and there’s an option to “Suspend the virtual machine.” But even if that’s the feature I’m looking for, this option wouldn’t work because I need to run multiple VM’s at once which I don’t believe is possible in Player. This feature is described in the documentation at https://docs.vmware.com/en/VMware-Workstation-Pro/14.0/com.vmware.ws.using.doc/GUID-E3CF099C-DE18-44A4-9B81-24BCD72004BE.html

This is the NSX-T Reference Design 2.0 based on NSX-T release 2.5. It is the foundational overhaul to design guidance and leading best practices.  The key changes are:

Finally, in this version of design guide we have a chapter on performance. This chapter has been introduced on public demand from our loyal customer base and aims at clarifying the myths vs facts on NSX-T based SDN.

Starting with this design guide, readers are encouraged to send a feedback to NSXDesignFeedback_at_groups_vmware_com  (replace at and underscores)

Hello all….  After updating to the latest 5.5 patches we started seeing some messages repeating at different times (no time pattern) in the vmkernel log on all of our hosts.  The message is:

These messages repeat all day every day.  We boot from a supported SD card and the message indicates the USB device is to blame.  I opened a ticket with VMware, they stated that the messages are benign and nothing to worry about and are related to an updated SCSI driver in the patches we applied.  Basically the message is indicating that vmware is sending sense data to the USB controller which it does not understand and is sending back an illegal request.  Their suggestion was to reach out to HP for a firmware update. (we are at the latest FW on all hosts and I have tried backing down the FW to see if that would help) I have done that however I’m in the midst of a pissing match between VMware and HP both blaming each other for the fix so I’m turning to the community for help.

We have a mix of HPE DL380G8 & G9, and a spattering of ML350s at remote offices.  All of the updated servers are logging this message.

Are others seeing these same messages in their logs?  Given we have seen this on multiple hosts across multiple generations of HPE servers I’m inclined to believe others are seeing this as well?

To add to it, we recently purchased several DL360 Gen10 servers running 6.5.  All of those servers boot from SD card as well and log a similar message:

Thanks in advance for any advice on resolving this.