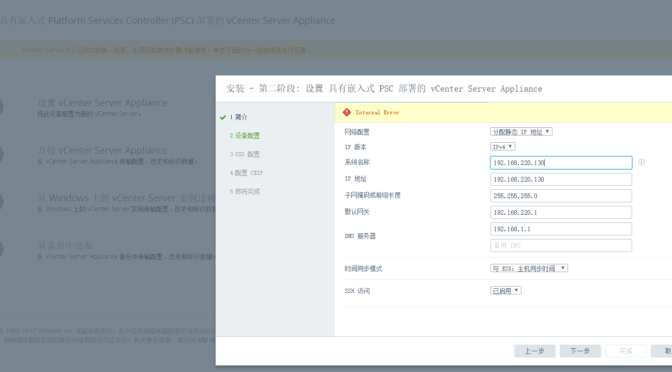 I install a VCSA 6.5 on a ESXI 6.5 server. When the install finish, I login to the web client the first time. I was asked to configure vCenter before use it. I filled the blanks and click “Next”, but I always get “internal error” . I don’t know what is the Internal Error. Could anyone help me?

I have a Fujitsu RX 300 S7 with ESXi 6.0 U3 and a Synology RS2416+ containing a RAID 10 with 4x 4 TB WD Red HDDs. I have created a file-based LUN on the Synology and I have connected the Target to the ESXi over 3 NICs via round-robin. This means, that all of the 3 NICs are used for the connection between the ESXi and the Synology (I have followed this tutorial).

I have made several tests with WMware IOMeter and CrystalDiskMark and the results are great (350 Mb/s and ~50k IOPS read), but during the tests, the ESXi hypervisor freezes. If I disable the Target on the Synology and enable it back again, the ESXi and the test VMs start working as if nothing had happened.

In the vmkernel.log I can find find several entries containing this line: “Waiting for timed out HB” (please find a screenshot attached)

Whan is the cause of the error? How can I fix the timeouts? I really need the higher throughput (=3 NICs) for better performance.

Thank you in advance!

I am still at learning level so this my sound stupid, but here it goes.

I have an HP server with 4 nics. the default vmnic0 is attached to vSwitch0 and everything works great. I created another virtual switch (switch2) and configured vmnic1 as upload link. Any VM attached to switch2 won’t connect to network. If i change the properties of the VM and connect to vSwitch0 everything work so the problem isn’t in the VM operating system. I changed the uplink link for vSwitch0 from vmnic0 to vmnic1 and everything work ok, so it’s not an hardware problem. I jumped to the conclusion that my created “switch2” is the problem but i can’t seem to pinpoint it; properties of the switches (vSwitch0 and switch2) are the same but maybe i am missing something. Any help is greatly appreciated.

Has anyone has good results with Accessibility software, such as Zoomtext and Jaws screen reader?

Any tips? Do you put it in the gold image or appstack it?

course was quality was good. But I missed one thing big in the training -Trainer/Teacher. Though training included various technical topics at somepoint I would have liked to have conversation with trainer.

Idea: Can’t we have trainer just one hour online/webex/chat in case you have any questions/doubt. This allow the student ask question, clear doubts and provide what next input.

Study material is lacking big time for advanced exam. The official guide for none of VCAP/VCIX exam is available yet. We all understand it takes dedicated time to write a book, review and modify when new version is released. Study material should be dynamically updated as is docs.vmware.com. Of course lots depend upon if this study material will be paid. With cloud/digitalization book writing business model should change.

Moderators Panel should be formed which might include VCDX or VCAP (Double) should be allowed to moderate the content. We all know how popular and effective this group is for any aspiring VCAP6’s https://plus.google.com/communities/103910393937429082483. But I noticed very difficult to browse through and more difficult to validate the authority of the comments.

This post was originally published on this site
I know there is already a post with a similar title.  However, to assist other Airwatch Admins who may run into this, I figured I’d put key pieces of info in the title for a quicker and easier find.

If you’ve setup a Launcher profile on a Samsung phone with Android 7 and the ‘Call Screen’ portion of your Phone app is being blocked, please do read on.  For good measure, I’ll mention that you will most likely be able to open the initial portion of the Phone app — dialer, contacts, etc.  You will however, most likely be blocked and receive the ‘ Your IT Admin has restricted access to the app – Phone’  when you try to place the call.

The following application package IDs need to be added to an Airwatch Launcher payload as either a miscellaneous app on the home screen or under hidden apps.  To confirm, this seems to be on Samsung phones with Android 7 Nougat.  Earlier versions of Android must’ve had different package IDs for the phone app and related components.

I had a couple of them but not all.

Also, just for second good measure, if you click on the Launcher settings gear (the down arrow, same arrow as if you were to log into the Launcher as an Admin), and go to Blacklisted Apps — this will show every app and hopefully package ID that is blocked when you receive a ‘ Your IT Admin has restricted access to the app – xxxx’  message.